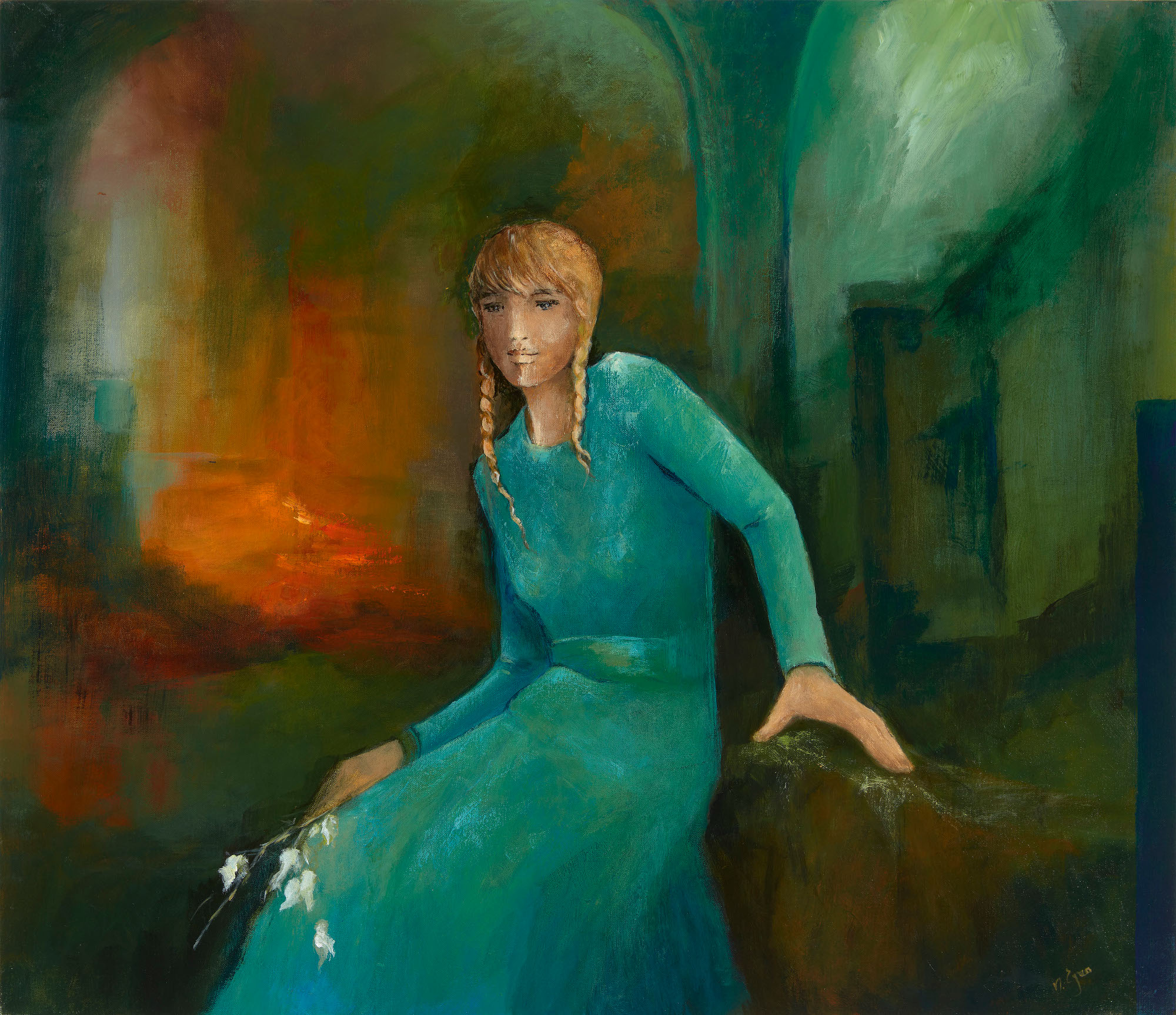 The Rhythm of Our World, Solomon Fine Art

“Many of Margaret’s paintings simply explode with vibrant colour; other works are moody, atmospheric paintings that reflect the wild and mystical landscapes and seascapes of Ireland. Whatever the subject matter and whatever the medium, Margaret’s persona and her philosophical views of Ireland and of the world are palpable in her work.”

“Egan’s working method is relatively straightforward. She sketches briefly whilst on walking expeditions and paints from memory later in the studio. She says that she always prefers to work in this manner, favouring the view that although memory is not always accurate the feeling is always true.
The mood is mysterious, speculative and tranquil. This is work of considerable subtlety. Playwright Bernard Farrell when describing hat he called the magic of Margaret Egan’s work noted that “it teases and taunts, it challenges and beguiles, it constantly proffers an invitation to explore the artist’s mind, to find the inner story and in doing so, to perhaps discover an aspect of life or of nature that we have long since hidden from ourselves”.

“Her amazing land and seascapes, depicting an Ireland that is both real and mystical, are painted in the true and earthy moody colours of the Irish landscape. In her figurative work, Margaret captures the same feeling of mysticism and we are invited to ponder for ourselves on what the subject is thinking or feeling.”

“It’s the stark contrast of rough and smooth coupled with the passion of the Irish landscape that attracts me to tit. Of course, our light in Ireland can be so dramatic in its constantly changing nature; in how it reshapes scenes from one moment to the next, and that I also find very exciting.”

“The current exhibition of works by Margaret Egan was one of the most charming and delightful I’ve seen in Dublin for a long time. Figurative with a delicately nuanced balance between paintings and sculpture, the mysterious and slightly fey atmosphere in her work was remarked upon by playwright Bernard Farrell.”

“Muted in colour and tone, her figurative paintings have a certain air of mystery about them. Her landscapes are brimming with brooding greys and blues and russet shades. And her sculptures are drawn together by a refined elegance.”

“Clearly, Margaret Egan can offer us her own way of seeing things and painting them, which one can recognise as distinctive. This marks her as a talented and interesting artist, at ease with her craft, making it work in turn to open a door into her perception of the way things are.”

“I am aware that I am often enthusing in these forewords about the new work of the exhibiting artists and that this could be interpreted as a “sales pitch”. However, if you are passionate about the work of those you represent and believe that their work is continually developing and changing, it is almost inevitable that there will be a certain degree of “gushing”. In my case, I like to think that it is sincere gushing!

Margaret Egan’s work in this show does not escape that treatment. The Dublin artist’s paintings have moved on since her last exhibition here two years ago. There are some more hat paintings but, like the rest of her work, there is much more texture in them than before and the presence of the two women in ‘Reunion’ is all- powerful.

She pulled out her seascapes, dark grey skies and angry seas of a winter’s day, Both the figure paintings and the landscapes of both her native Ireland and of Tuscany are of a wonderful quality, many of the landscapes bordering on the abstract. Their tones and textures in the Irish paintings, however, somehow leave you in no doubt of where you are. You can almost smell the peat in ‘Burnt Earth’.”

“I have always been intrigued by people and landscape and exploring the endless possibilities of the relationship between the two.

The places that people inhabit somehow retain their energy and it’s interesting to try to capture a moment in time when one influences the other. The residue is then left and it, in turn, affects every other thing that comes after. I always try to work from memory and although memory is not always accurate, the feeling is always true.

The landscape in this show is mostly Irish, apart from a few that were inspired by journeying through France and Italy last year. For me the challenge is again to get the feeling of the landscape, the layers of history, the history of nature itself with its wonderful raw, sad and sometimes painful excitement.

I want to push the work to its limit, to try to go just beyond, to the truth of it. I will go on trying because I have a passion for it. I have no idea where it will go and that in itself is exciting.”

“Margaret Egan is one of Ireland’s leading artists. She has exhibited in Ireland, Wales, the United States, France and Singapore but this is the first time. in a career spanning thirty years or so, that she has had a solo exhibition in England. I met Margaret a couple of years ago in Dublin. She lives near Dun Laoghaire, overlooking the sea which is the inspiration for a number of her moody, atmospheric paintings.

At that time she was preparing for a solo show at the Ashford Gallery in the Royal Hibernian Academy, Dublin and paintings were stacked in her home ready for transportation. The evening had been a social occasion and I had had no real intention of looking at work in the wee small hours. However, having looked at one painting I just had to see them all — I thought they were absolutely brilliant.

She pulled out her seascapes, dark grey skies and angry seas of a winter’s day, inspired by the view from her window and by her frequent trips to the west coast. Next, I was confronted by landscapes painted both in Ireland and the south of France, canvases brimming with vibrant colour.
As if this was not sufficient, deep, rich still lifes followed, beautifully and effortlessly composed with flowing strokes — a joy, a real joy. And then the mood changed. She showed me her figure paintings, an air of mystery about them, the palette more subdued, an ethereal feeling emanating from the characters depicted there.

Since then I have been back to Dublin on several occasions to discuss this show with Margaret. We successfully introduced her work at ART 2003 in London last January and thereafter in the gallery. However, we have so far only shown Egan’s seascapes and we are now pleased to exhibit the full range of her talents in this show.

And, of course, there are the bronzes. In this show we are exhibiting five of Margaret’s latest editions. They are sensitive sculptures celebrating love and passion, deftly crafted. Egan is a ‘feminine’ woman and her sculptures, like many of her paintings reflect various parts of her own life, philosophies and persona.
I truly love this work. It is work of pure quality. That exhibition at the RHA, her last solo show, was a huge success. I hope, indeed expect, that this one will achieve the same.”

“The paintings are based on the artist’s reactions to her immediate environment, which serves to imbue them with an unusually emotive intensity of colour and brush stroke. Egan uses her distinctive style to powerful effect with little more than a nod to any perceived constraints to traditional landscape painting.”

“Unifying Monkstown and south of France paintings is a consistently intuitive approach to paint and colour, a fluidity of form and an emphasis on heightened mood.”

The Journal of the Royal Institute of the Architects of Ireland, February 2002.

“Margaret Egan’s Breaking Horizons at the Ashford Gallery, has proved to be extremely popular. Her acrylic paintings, landscapes for the most part, with some still lifes, are bold and vigorously made. What is appealing about them is that the artist seems to relish her freedom, seems to have enjoyed making them and has imparted her enjoyment to the finished products.”

“Margaret Egan’s work stems from a personalised vision or view of the world, where lyricism and emotional musing are embedded in the content and execution of each poetically titled painting.”

“I actually start with a feeling, I start painting and it’s almost as if I leave the studio, and it’s done and I look at it and say I’m not sure I did that, but of course I did. Then I look for a title that will evoke what I was feeling”.

“Paintings speak to people in different ways, but one thing is certain, the power of the works of Irish-born painter Margaret Egan, cannot be ignored.”

“‘Red Bloom’ is a compelling, exciting, mysterious painting. Perhaps this is because it connects into a very deep part of our psyche, the part we keep hidden – our deeply sensual, passionate, explosive, feminine, emotional nature which demands illumination, recognition and the right to bloom.”

“Her flowers have an inner strength, sometimes in passion, sometimes in restraint but always with a depth and are stimulating.
She is an artist who presents people in their environment and links them to a pattern which they form with their surroundings.”